Skip to content
Home » What Big Brands Use Shopify? [20+ Brands] 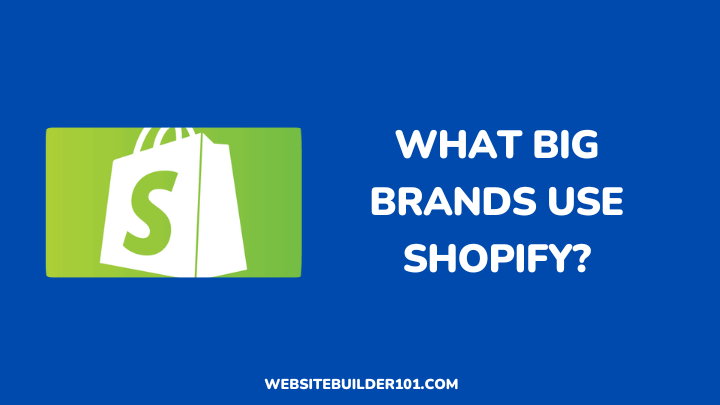 Shopify is the home of eCommerce. It has a vast library of apps and customizable features that help online merchants build profitable stores. The brand also has a Shopify Plus eCommerce package that supports brands with high-traffic products.

Ever since it was founded in 2004, Shopify has powered some of the biggest brands in the world today. One such brand is Skims, a shapewear company that business mogul Kim Kardashian owns and manages.

What other big brands on Shopify come to mind? It’ll interest you to know that there are over 20 such brands.

Let’s go over them together.

Beauty and makeup brand, Sephora is one of the big names on Shopify. Whether you’re shopping with Sephora’s gift card or your credit card, there are enough items to purchase on their eCommerce platform.

The French multinational retailer features several products. This includes skin care, exotic fragrance, and other beauty products from over 250 brands like Fenty Beauty. This gives their customers an array of products to choose from.

There’s no denying that Kim Kardashian, founder of the Skims brand has revolutionized the shapewear and loungewear industry.

With products for nursing mothers, gym enthusiasts, and everyday women, Kim’s products are a high point for women who want to look their best and feel confident in their underwear.

The brand has a thriving store on Shopify and continues to serve millions of customers globally.

If you’re a fan of Adele, you’ll surely want to get your hands on her products. This includes her merch that is up for sale on Shopify. Yes, Adele has a successful store on Shopify Plus which helps her cater to the needs of her large fan base.

Whether she’s having an album launch or music tour, her merch shop is available 24/7 for fans who want to show up with a touch of Adele.

Victoria Beckham is a famous name in the fashion industry and why not? With her Victoria’s Secret product line that help woman around the world wear their curves with pride, she has an indelible time stamp in the industry.

Well, here, the focus is on her beauty brand. She co-owns the brand with Sarah Creal. And so far, the numbers in sales speak for themselves.

Shopify is one of the eCommerce platforms her team leverages to create the beauty online store that serves her wide range of customers.

If you cannot legally sell your drinks online, you know you can sell your merchandise, and that’s what Red Bull has done.

Red Bull is a strategic Austrian energy drink brand that launched in 1987. And its influence in racing and football, including its sports franchises has gained lots of interest worldwide.

The brand sells various merchandise and products from these sports franchises on its Shopify store. And you can trust that racing and sports enthusiasts will always find their way to the store to show commitment.

In March 2020, Heinz, a brand famous for its food and condiments launched its new website in response to the Covid pandemic.

The direct-to-customer site was set up on Shopify Plus. That way, people who couldn’t go out for fear of contracting the virus could have access to their favorite Heinz products.

If you’re a health and fitness enthusiast, you’ll know a thing or more about this brand on Shopify. Following its launch in San Francisco in 2007, Fitbit wearable fitness tracker became the go-to for many fashion-forward users.

The brand launched its store on Shopify and has since been acquired by Google, following its massive growth.

Bremont is popular for its luxurious and exclusive watch collections that it carefully handmakes to exceed expectations.

The British brand has a wide range of products globally for its male and female populace. And its user-friendly store on Shopify is easily accessible to customers who want one for themselves.

Tropic Skincare is one of the big brands that use Shopify. Founded by Susie Ma, it has over time become one of the fastest-growing brands in the UK skincare industry.

Susie Ma’s line of products includes Tropic Elixir oil, and she has something for mothers and babies. Her fans from “The Apprentice” show are one of the backbones of the brand’s success.

Kylie Jenner is a self-made billionaire, but that’s all thanks to her skincare and cosmetics line.

She qualifies as one of the big brands that use Shopify because her online cosmetics store uses Shopify Plus to sell her branded products.

Tesla is another big brand that uses Shopify. The company is known for its electric cars, solar and clean energy. You can get anything from chargers, merches, and other branded products and pay for them using cryptocurrency.

Founded in 1923, Hasbro, an American multinational toy and board game company has been at the forefront of producing toys mainly for children. The brand is one of the largest toy makers in the world and sells many of these items on its online store built on Shopify.

They also feature action figures, dolls, board games, and other items. Hasbro is best known for its iconic brands such as Monopoly, My Little Pony, Transformers, G.I. Joe, and Nerf.

The company was founded in 2016 by former professional athletes. And over the years they’ve shown immense commitment to producing comfortable and sustainable shoes.

Allbirds’ product range includes wool, tree, plant-based foam, and leather shoes, and you can find them easily via its Shopify-built store.

Gymshark is an innovative and fast-growing fitness apparel brand established in 2012.

The UK-based brand has seen massive success both in its online and physical stores. The brand migrated to Shopify after an unprecedented Black Friday failure while it was still hosted on Magento.

With its new store up and running on Shopify, more people have access to its unique performance-enhancing apparel.

Netflix’s movie subscription service is one of the many things the brand is known for.

But aside from its Netflix and Chill promotions, its online store is replete with colorful merchandise you cannot help but like. Netflix is another big brand using Shopify, which shows how reliable the eCommerce platform is.

If you’re a fan of the Penguin Books brand, you’ll agree that one of the easiest ways to escape into another world is by burying your head in some of its good ol’ books.

Aside from being one of the world’s most recognized publishers, Penguin Books has had a rich history of publishing quality books for nearly 80 years.

Luckily, its online store is powered by Shopify and easily accessible to the public.

Lindt Chocolate is a Swiss company producing premium chocolates since 1845. Their dedication to craftsmanship and quality ingredients makes them one of the leading chocolate producers in the world.

Their signature chocolates feature smooth, creamy fillings encased in a thin shell of premium chocolate. Beyond their traditional bars, they also offer products such as truffles and novelty items. Lindt has its largest online store on Shopify.

All thanks to Amazon’s retail supermarket chain, consumers now have access to over 250 global grocery chains.

Whole Foods Market is committed to offering customers the highest quality organic and natural products, focusing on local, sustainable sources. And the brand has lived up to its name, especially through its Shopify Plus store.

The store was set up on Shopify and continues to help men look and feel their best.

Kim Kardashian doesn’t seem to be slowing down in launching functional and exceptional products that meet the needs of her large client base.

With the release of her SKKN by Kim line powered by Shopify, Kim is bent on helping her fans achieve the perfect skin blend through her products.

The company was founded in 2012 to make swimwear fashionable and comfortable, while still being affordable. Its signature style features bold colors and prints, unparalleled comfort, and affordability – all with a focus on quality.

Is Amazon a Shopify?

No, it isn’t. Amazon is a platform that serves as an online marketplace. On the other hand, Shopify specializes in eCommerce, helping online merchants create profitable stores.

Does Walmart use Shopify?

No, they don’t. The only connection between Walmart and Shopify is that Shopify merchants can sell their products on Walmart.com.

Does Adidas use Shopify?

The answer is yes. Like Nike and other big sneaker brands, Adidas also uses Shopify to promote its products to its large market of sneakerheads.

Shopify is a popular eCommerce website builder with millions of online merchants using the platform daily to showcase their wares.

Big brands are not left out either, as many see Shopify as a reliable platform to host their businesses. Some brands that use Shopify include SKKN by Kim, Netflix, Tesla, Hasbro, and the list continues.

These brands have added to the credibility of the platform and more are likely to come on board in the nearest future.

Need more on Shopify? Check WebsiteBuilder101 for other guides on Shopify.

What Others Are Reading